Who doesn’t enjoy the opportunity to say “I told you so?”

Perhaps only the most self-critical and masochistic individual doesn’t like to be vindicated. What follows in this piece is the story of vindication for the way we do certain things — and always have done certain things — at the Little Hill Foundation.

In psychiatric practice, as in so many areas of human activity, the pendulum of trends in prescribing psychotropic (“acting on the mind,” or “psyche”) medications has swung widely over the years: From disinterest and avoidance of these medications (during the psychanalytic era in the first half of the twentieth century); to the guarded but hopeful use of limited psychotropic agents (in the 1960’s and 1970’s); to the acceptance of tailored and specific “monotherapy,” or use of single agents for patients (in the 1980’s and 1990’s”);* to “polypharmacy,” the enthusiastic and wholesale prescribing of multiple psychotropic medication for multiple presumed clinical diagnoses in the same individual (in the 1990’s and 2000’s); to a recent backlash movement against polypharmacy called “deprescribing” (over the past several years).

“It is an art of no little importance to administer medicines properly;
But it is an art of much greater and more different acquisition to Know when to suspend or quit them altogether.”
Philippe Pinel (1745-1826)

At Alina Lodge and Haley House from the beginning (1957 & 2007), the conservative and minimalist approach to pharmacotherapy has recognized on the one hand that pharmacologic solutions to the problems of chemical and behavioral addictions run counter to the core abstinence and 12-step recovery treatment philosophy of the Little Hill Foundation treatment programs, and on the other, that virtually all the of the students and residents at Alina Lodge and Haley House are in treatment” to Little Hill’s way of doing things, but through what has been termed “deprescribing,” mainstream psychiatry has begun to do just that.

As recently defined, “deprescribing” is “…the planned and supervised process of dose reduction or stopping of medication that might be causing harm, or no longer be of benefit… backing off when doses are too high, or stopping medications that are no longer needed…”2

The process of “deprescribing” has been applied predominantly to geriatric medicine,3 in which multiple prescribing (“polypharmacy”) characteristically occurs for multiple organ systems and includes proton pump inhibitors (“PPI’s”; for acid reflux disease), diabetic medications, cardiac medications and hypertensive agents, cholesterol-lowering medications, psychotropic agents, and a variety of others. The following Figure, adapted from Moriarty and Farrell and the WHO4, illustrates general principles for prescribing those medications and strategies for tapering, and where indicated, discontinuing, such medications. 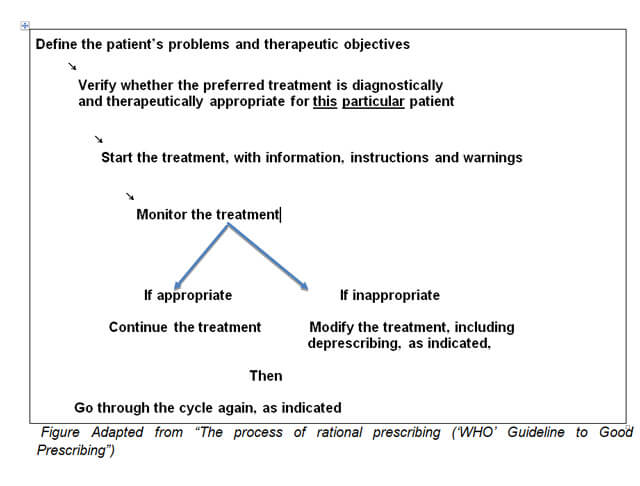 Coming full circle, the closing words from the instruction sheet on “The Role of Psychiatry at Alina Lodge”5 — given to new students on their admission to Alina Lodge — ring true under the concept of “deprescribing”:

…Finally, for those students whose symptomatology is due to a bonafide underlying disorder, Psychiatry at Alina Lodge will maintain them on appropriate psychotropic medications, monitor and supervise necessary changes, and provide necessary pharmacotherapy for them…”

Alina Lodge treats all types of chemical dependency such as alcoholism and drug addictions including cocaine, heroin, marijuana, methamphetamine, as well as prescription drug addiction. If you or a loved one struggles to stay sober, contact us today.

What Is Mindfulness-Based Relapse Prevention?
July 27, 2021